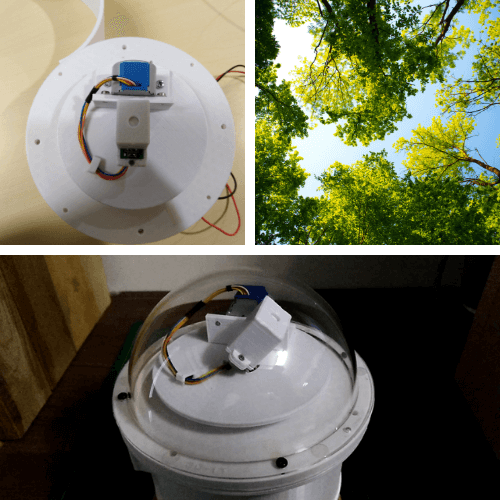 Light that drives photosynthesis is called Photosynthetically Active Radiation (PAR) and is typically defined as total light with wavelength in the  range  400-700 nm. Conventional PAR sensors provide a single value of light irradiance in that range.

We developed and engineered a canopy spectral sensor based on a spectrometer that can capture the entire light spectrum from 350 to 850 nm with a resolution of better than 10 nm. The system is mounted on a moving platform that is able to rotate about two axes. The system enables the measurement of the sunlight distributions as a function of the elevation and azimuth in terms of both its intensity and its spectrum.

We engineered the readout system of the spectrometer to be able to measure any light level, from very low levels such as those of dusk or dawn, to extremely bright conditions such as those when the sensor is pointing directly towards the sun. The system is battery-operated and powered by a solar panel: it can collect data continuously for weeks at a time without intervention and log the data onto a memory card.

In this way, the system can map the sunlight levels during the day at any present range of angles or over the entire hemisphere. It can be placed under an orchard canopy to quantitatively determine the light interception efficiency of the plants at different times during the day.

Our canopy light sensor is currently being used by scientists at Agriculture Victoria to understand how light interception efficiency affects yield and growth rate in almond orchards. Other applications include light intensity measurement under plant canopies in outdoor environments, greenhouses, and growth chambers.

Wondering what we can do for you?

Contact us
We use cookies on our website to give you the most relevant experience by remembering your preferences and repeat visits. By clicking “Accept”, you consent to the use of ALL the cookies. Read More

This website uses cookies to improve your experience while you navigate through the website. Out of these, the cookies that are categorized as necessary are stored on your browser as they are essential for the working of basic functionalities of the website. We also use third-party cookies that help us analyze and understand how you use this website. These cookies will be stored in your browser only with your consent. You also have the option to opt-out of these cookies. But opting out of some of these cookies may affect your browsing experience.
Necessary Always Enabled
Necessary cookies are absolutely essential for the website to function properly. These cookies ensure basic functionalities and security features of the website, anonymously.
Functional
Functional cookies help to perform certain functionalities like sharing the content of the website on social media platforms, collect feedbacks, and other third-party features.
Performance
Performance cookies are used to understand and analyze the key performance indexes of the website which helps in delivering a better user experience for the visitors.
Analytics
Analytical cookies are used to understand how visitors interact with the website. These cookies help provide information on metrics the number of visitors, bounce rate, traffic source, etc.
Advertisement
Advertisement cookies are used to provide visitors with relevant ads and marketing campaigns. These cookies track visitors across websites and collect information to provide customized ads.
Others
Other uncategorized cookies are those that are being analyzed and have not been classified into a category as yet.
SAVE & ACCEPT
error: Content is protected !!